Middlesex University London is taking a leading role in introducing science to diverse communities with SMASHfestUK which encourages young people from all backgrounds to get involved in science and aspire to future careers in this area.

The project, run by Middlesex University in partnership with The Refinery and the University of Greenwich, aims to widen participation in science, technology, engineering and maths (STEM) through the arts and design, and involves interactive installations, performance, music, film and participatory art around engaging themes such as super volcanoes.

Last month, the festival took to the streets of Deptford, for its third year, with the news that an undiscovered super-volcano was about to erupt. This included building a five metre high cryovolcano. Using liquid nitrogen at -196 degrees to set off the explosion the cryovolcano erupted to shoot 1500 ping pong balls high above the Albany Theatre in an official Guinness world record attempt. Official administrators from Guinness world records were present to monitor and film this record attempt for the largest liquid nitrogen model volcano which is now being ratified.

As lead academic partner of SMASHfestUK, Middlesex University staff and students from product design, design engineering, maths, computer science, animation and illustration courses led activities throughout the festival in Deptford. Deptford is a particularly appropriate location for SMASHfestUK. 50% of young people in Deptford live in poverty, and 75% of young people in schools are from black and minority ethnic groups. 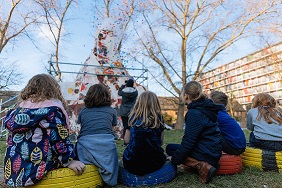 Wyn Griffiths from Middlesex University London is co-founder and director of the project, he said:

“SMASHfestUK tends to take over life completely because it’s such a wonderfully creative way of getting kids interested in science and engineering, and the everyday wonders of the world around them, again.

“One problem we face is that most primary schools use project-led learning to engage younger children, but once those children get to secondary school the way learning is delivered changes and many children become disengaged.

“As well as our super-volcano, previous themes have included an impending asteroid collision and a massive solar storm.  SMASHfestUK is a great way of reminding them that science is still fun.”

SMASHfestUK tackles an important and critical issue in an imaginative and engaging way. Its mission is to stimulate the interest of young people in STEM, and to build science and cultural capital in their families and wider society. This is a pressing issue as interest and achievement in STEM topics in schools is declining, leading to low entry levels to STEM tertiary studies and careers and an imbalance in the supply and demand for qualified STEM professionals. The implications are serious as science and research are major contributors to the UK’s prosperity. If the UK’s economy is to continue to prosper, high skill levels in STEM are needed, and diverse groups need representation.

In 2015 SMASHfestUK set out to introduce young people (aged 7 to 17) to STEM subjects in fun and creative ways that appealed to their imaginations. The festival strategically targets those who are under-represented in STEM, such as economically disadvantaged young people, women and girls and BAME communities. So far the programme has reached around 17,000 school children and families from two London Boroughs and there are plans to expand it to UK wide. New university, museum and community group partnerships are being developed, with a UK 'Earth and Sky' Tour being funded for late 2017 by the UK Space Agency and the Royal Academy of Engineering.

In November 2016 SMASHfestUK was awarded the top prize in the Science, Technology, Engineering and Mathematics (STEM) category of the National Co-ordinating Centre for Public Engagement’s bi-annual Engage Awards. The NCCPE judging panel said:

“This team took a concept that lots of people talk about, and turned it on its head. They challenged concepts of hard to reach, and worked with young people to create a festival everyone wanted to be part of. Disaster led, this project was far from it.”

“The project is just one example of a growing trend amongst the UK’s researchers – to reach outside the university to really connect their work to wider society and involve the public in research in meaningful and potentially transformative ways.”

SMASHfestUK is a great example of the impactful public engagement and outreach work which Middlesex University does across London to increase social mobility and raise the aspirations of young people.