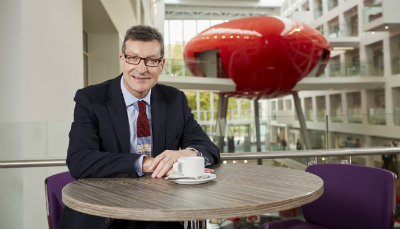 Solent University Vice-Chancellor Professor Graham Baldwin writes on the importance of EU students to the UK, the need for clarity from the government on its proposals for those students and restates the case for a common-sense approach to UK-EU student reciprocity, based on international good practice

Two years on from the EU referendum, we are edging ever nearer to crunch time, with key talks slated for the European Council meeting this month and Britain’s official exit day, 29 March 2019, less than six months away.

While a little light on detail in some areas, the government’s long-awaited White Paper published in June covered many, but not all, of the key bases raised from a higher education perspective. One important area not covered in the White Paper is the status of new students from Europe being recruited from 2020 onwards. Such students are crucial members of our academic community here at Solent University, something that applies across almost all university campuses in the UK.

The challenge yet to be addressed

In July, Solent, along with fellow universities in the MillionPlus group, called for this important omission to be corrected. In a policy paper on this topic we urged the government to negotiate an agreement with our European partners that ensured that the university fee levels charged to UK resident students continued to extend to our fellow Europeans. Some loan support for those fees, decided on a value for money basis, should be offered to students from the EU nations - and perhaps others on the continent who are not in the EU such as Switzerland.

This would create a new European Student status in law and international agreement, allowing continued close higher educational links between us and European nations. As the UK Government insists, Brexit should go hand-in-hand with retained close links and shared projects with our nearest neighbours. This is critically important in relation to higher education, which is an activity that is intrinsically cross-border in its nature.

Without these steps, we will likely see a sharp drop off in students from Europe coming to the UK. This will harm the UK and our own students as those from Europe play such a positive role at our universities in Britain. This valuable role is social, educational and economic.

This is not just a theoretical risk – the effects locally in our communities could be highly significant. Here at Solent University, more than one in eight students is from Europe. Their presence as part of our university community offers everyone in our community better opportunities to thrive and develop.

European students are a success story for the UK

Many of our students go on to achieve a graduate role that has been supported by their experience abroad. In addition to this we have students who have come to Solent from our European partners and have been offered roles in the city of Southampton, including at DHL and Cunard. This means that the vital skills acquired by those students during their time with us are retained within and contribute to our local economy. Data collected shows that over 90% of European graduates from Solent were either in employment or further study. Of those in employment, more than half were working in the UK, and a third of that number in the Solent region, thus contributing to our local and national economies.

European students fulfil key roles on and off campus, acting as volunteers, university ambassadors and advisors on project teams.  As ambassadors they work as the face of our community, providing opportunity for others to gain from meeting with people from different cultures and backgrounds. As well as representing and supporting the University, they support the community and regional business using creative skills to physically transform spaces and by providing different cultural perspectives on how to resolve challenges faced by regional and national businesses located in the Solent area.

The reality of the risk - hitting opportunities for future UK applicants

The impact of making it harder for European students to study in Britain would be keenly felt, here and at many other institutions. In some instances, it could even hit the viability of some of our courses also studied by UK students, knocking their chances of graduate success. In our School of Maritime Science and Engineering, more than half of the students on a key course come from Europe. On our BA in International Business Management the figure is 40%; with the same figure for our Yacht and Powercraft programmes. On some smaller niche courses, European and international students makeup the clear majority of the students on the programme.

A sharp reduction in European students post-Brexit because of changes to fee arrangements has the potential to hit these courses hard. If they were to close, that provision clearly disappears for our home students too, and so employers in our region lose a vital supply line of talent. This really would be a case of shooting ourselves in the foot as a country.

But there really is no need for us to act against our own interests in this area. We can follow a common-sense approach that takes on board differences between groups of students from overseas based on geographical proximity and cultural links. We could adopt a system like that by Australia-New Zealand, where students can cross the Tasman Sea to study, paying the same as home students and without the need for a visa. Similar bilateral deals have been done between other nations in the world who share close links, such as in Scandinavia, deals that have worked well for those countries and have stood the test of time.

Such an agreement would affirm the important role these students and prospective students play. It would signal that our professed wish to remain close partners with Europe after Brexit is not just empty rhetoric. The government has already committed in its White Paper to seek to play a full role in European research programmes and backed Britain’s ongoing participation in the important Erasmus+ programme. Now is the time for a similar guarantee on the future of valued members of our university community.